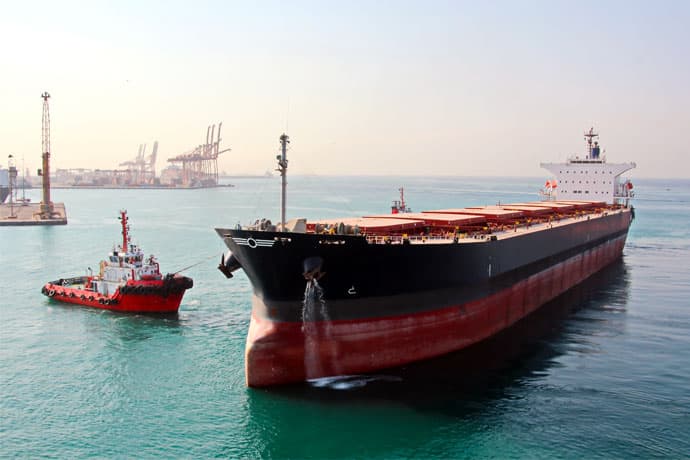 A guide to types of ships vessels

Spend some time on the open ocean and you’re likely to come across many types of ships and vessels, all with specific roles to play in the maritime world. These range from giant container ships built to transport cargo across the globe to small yet powerful tugs – vital vessels at every port.

But what are the types of ships you’ll most commonly encounter? Where will you be most likely to spot them? And what are their primary roles? You can find the answers to all these questions and more when you read through the page below. 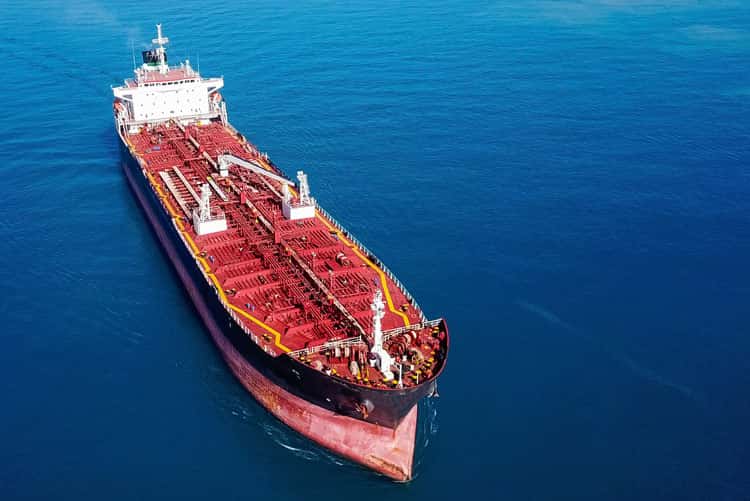 An example of an oil tanker

Oil tankers are the most common type of liquid cargo ship, transporting oil from oil-producing areas, such as the Middle East, to almost every corner of the world. Quite simply, without oil tankers, the world would grind to a halt – they really are that important to the smooth running of all nations.

The amount of crude oil these vessels can transport is staggering. The largest types are Very Large Crude Carriers – usually abbreviated to VLCCs – and they can carry up to 320,000 dwt, which translates to around 2 million barrels. Most larger oil tankers are too big to enter ports, so instead load and unload offshore, at specially designed locations.

You’ll also find that there are other vessels designed to transport refined products, and these are generally smaller than ships transporting crude. Typical liquids carried by these ships include petroleum, jet fuel, and diesel. 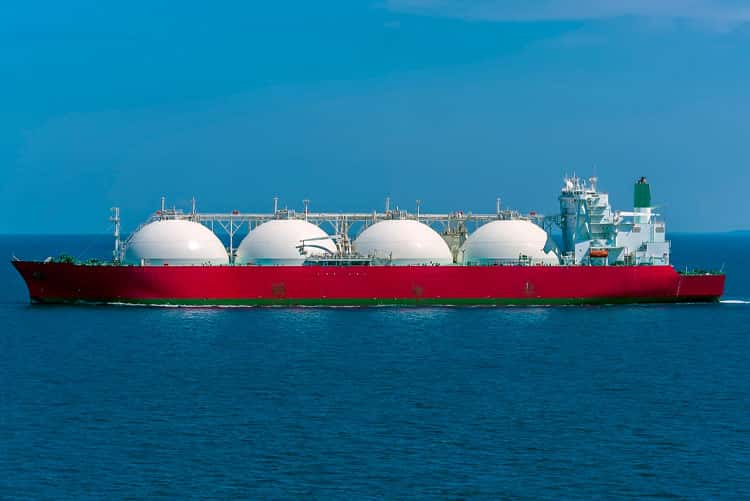 An example of a liquid gas carrier like LPG or LNG

These are highly specialised ships that carry Liquid Petroleum Gas (LPG) or Liquid Natural Gas (LNG). They used to be oil tankers but have been converted into the specialised vessels they are today, easily identifiable by the spherical containers onboard. These are designed for strength, ensuring they can withstand the enormous pressure liquid gas is carried under.

Of the two carrier types, LNG carriers are generally larger, with the largest of all LNG carriers, called Q-Flex vessels, able to carry up to 266,000 cubic metres of gas. As with other supersized ships, liquid gas carriers often require tug boats to navigate close to shore – tug boats for hire can be found at all major ports, including in Dubai. 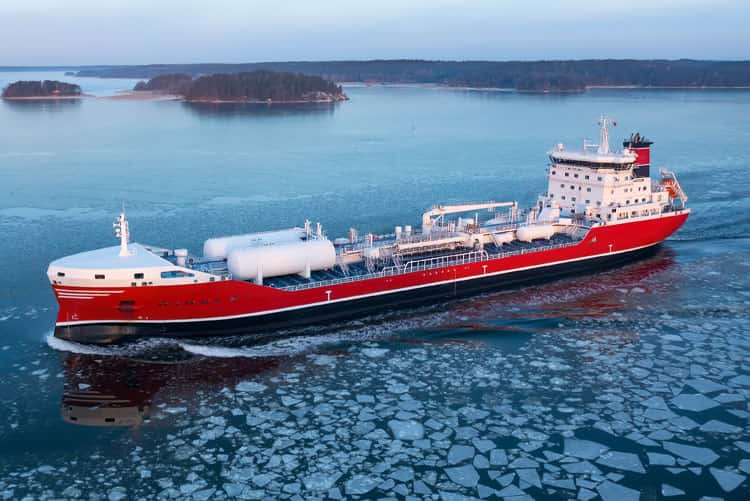 An example of a chemical carrier vessel

Chemical carrier ships are generally much smaller than the two aforementioned liquid cargo ships, and they’re used to transport specific chemicals. To transport these chemicals safely, chemical carrier ships can have a variety of modifications, including equipment to heat or cool the cargo and advanced cleaning systems to ensure purity is maintained.

Next up, we come to dry cargo carriage vessels. As the name suggests, these transport dry cargo, including a vast range of consumer products, foodstuffs, and raw materials, such as various ores. 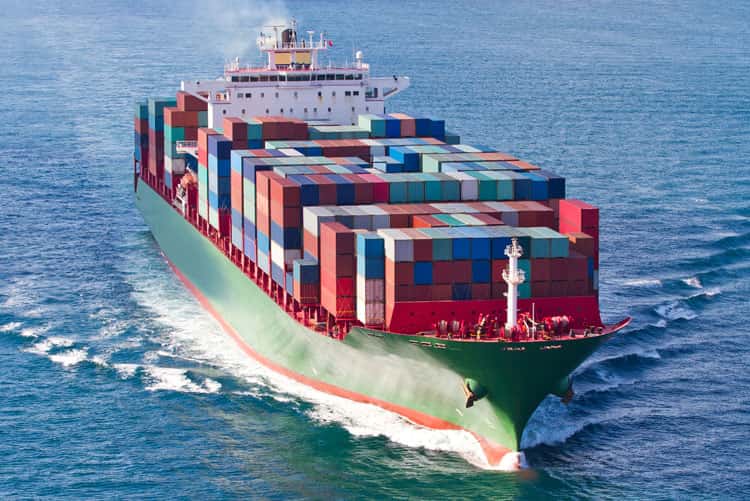 An example of a typical container ship

Container ships are familiar to most. They’re the enormous vessels piled high with containers, which can be filled with all manner of items. These containers are stored both beneath and above deck and are positioned securely to withstand even the roughest of seas – although containers sometimes fall overboard.

There are various types of container ships, the largest of which is the Ever Ace, which was built in 2022 and can carry 23,992 standard containers, which can weigh around 240,000 tonnes. But these gigantic vessels can’t always be used – smaller container vessels must often be used to navigate passages such as the Panama Canal, Suez Canal, and Malacca Strait. 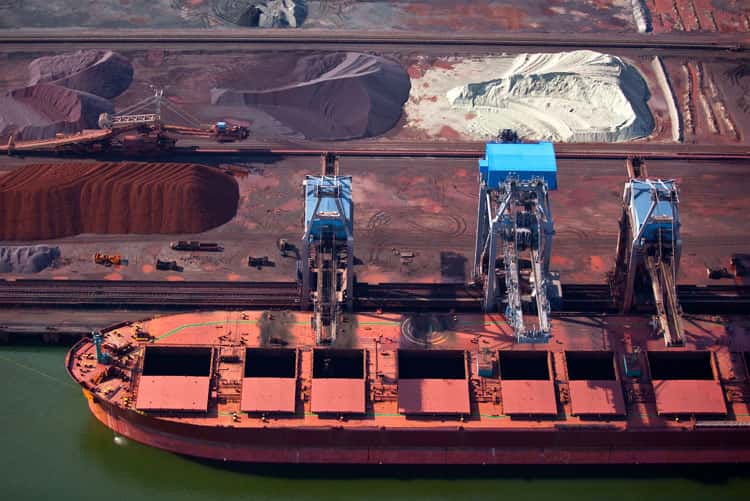 An example of a bulk carrier vessel

Bulk carriers carry unpackaged dry cargo, such as coal and ore. Transporting this dry cargo in small quantities wouldn’t be economically viable, which is why such huge amounts are transported at the same time. Vessels of this type are generally divided into several holds, all of which are covered by hatches. Spouts and conveyors are used for loading, while cranes are usually used for unloading.

While cargo can be unloaded onto land, it’s often the case that the cargo is unloaded onto smaller hopper barges, which then transport the cargo to where it is needed. It can sometimes take several days to load and unload cargo. While there were some notable sinkings of bulk carriers in the 1990s, new regulations have improved overall safety considerably. 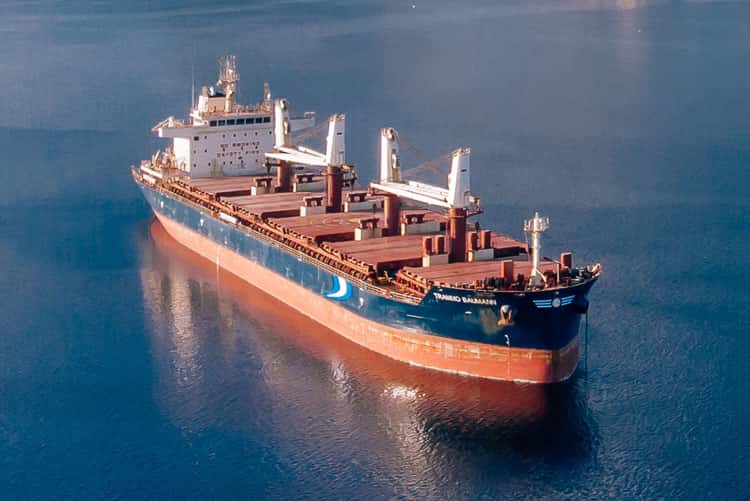 An example of a general cargo carrier 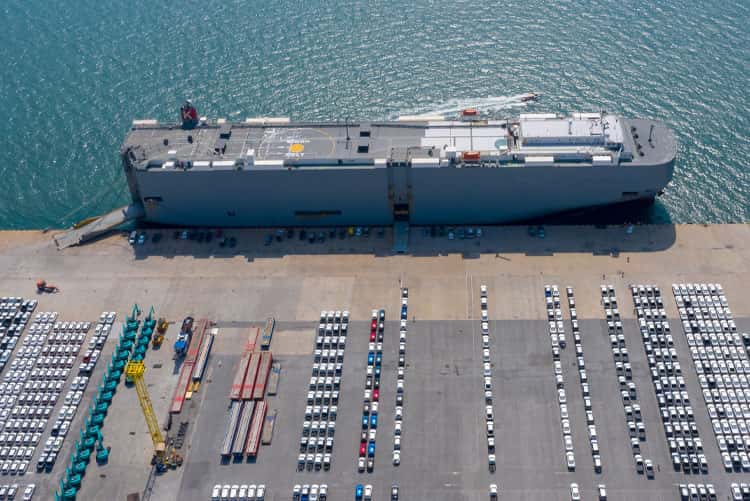 An example of a ro ro (roll-on, roll-off vessel)

Roll-on, roll-off vessels – often simply referred to as ro-ro vessels – allow vehicles to drive straight onto them before simply driving off again when the ship reaches its location. These vessels can vary hugely in size, from tiny vessels operating over very small stretches of water to giant ships with the ability to transport over 6,000 Car Equivalent Units.

To access a ro-ro vessel, a vehicle must drive over a ramp connecting the shore to the ship. Ro-ro vessels have a reputation for having a risky design, causing the vessel to be unstable. This has led to some notable marine salvage operations of ro-ro ships, such as the salvaging of the MV Modern Express in the Bay of Biscay in 2016.

Finally in our list of types of ships, we come to special purpose ships, which have been designed and built with a specific task in mind. 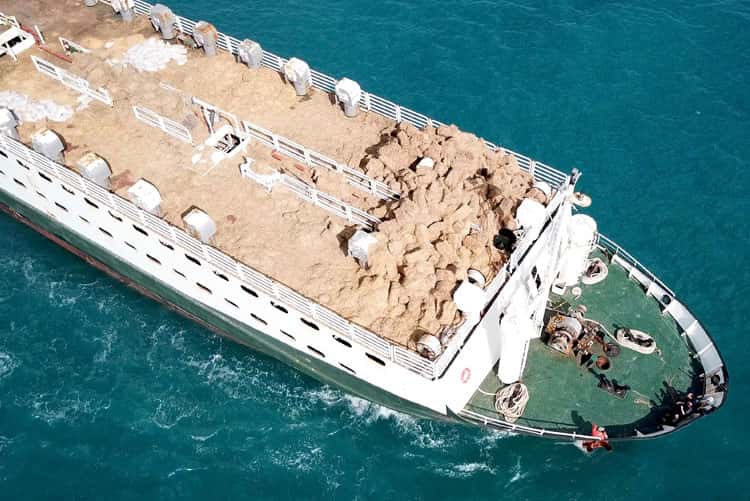 An example of a livestock carrier vessel

Livestock carriers carry livestock, such as cattle, sheep, and pigs. Very often, they were previously used for another purpose but were repurposed to allow them to transport livestock. One of the most common routes for livestock is from Australia and New Zealand to the Middle East. The largest livestock carriers can transport over 100,000 animals.

To be suitable for livestock transportation, vessels must be adapted to offer proper ventilation for all animals. There must also be facilities to feed and water the livestock. To receive livestock, a port must have the necessary facilities to handle large numbers of animals.

It should be noted that for much shorter routes, livestock can instead be transported on a lorry, which is then loaded onto a vessel, such as a ro-ro vessel. Of course, this wouldn’t be suitable for transporting livestock thousands of miles. 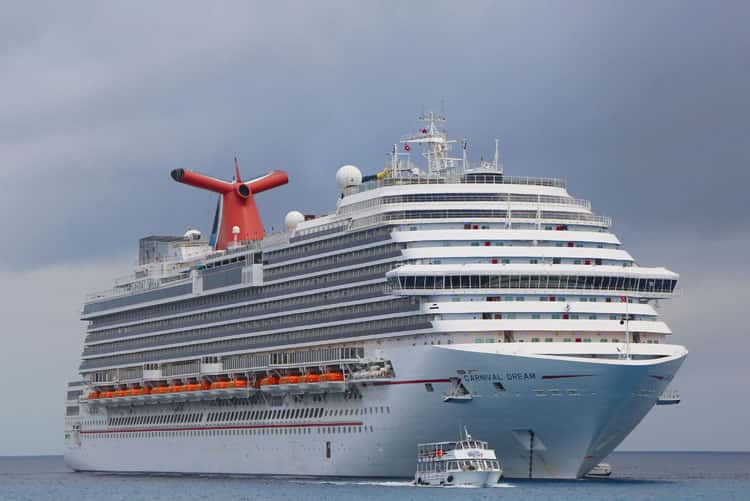 An example of a passenger ship

Passenger ships are used to transport people. Some are rudimentary vessels for transporting passengers just a few miles, while others are giant cruise ships, taking thousands of passengers on vacation. You’ll find passenger ships worldwide, including in Dubai, a popular stop for many cruises.

The largest passenger ship in the world was launched in 2022. The Wonder of the Seas is owned by Royal Caribbean International and can accommodate up to 6,998 passengers, along with 2,300 crew. Cruise ships are known for having many exciting features, including pools, bars, restaurants, theatres, and even ice-skating rinks. 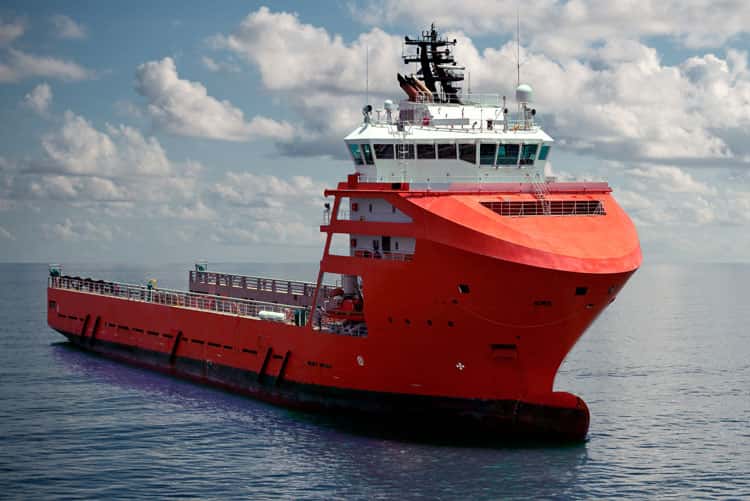 An example of an offshore platform supply vessel

These types of ships are designed to assist with various offshore projects, such as oil drilling and maritime construction. Due to the jobs they are required to perform, they are some of the most technologically advanced vessels on the planet. Some other offshore vessels have more mundane roles, such as providing accommodation to workers. 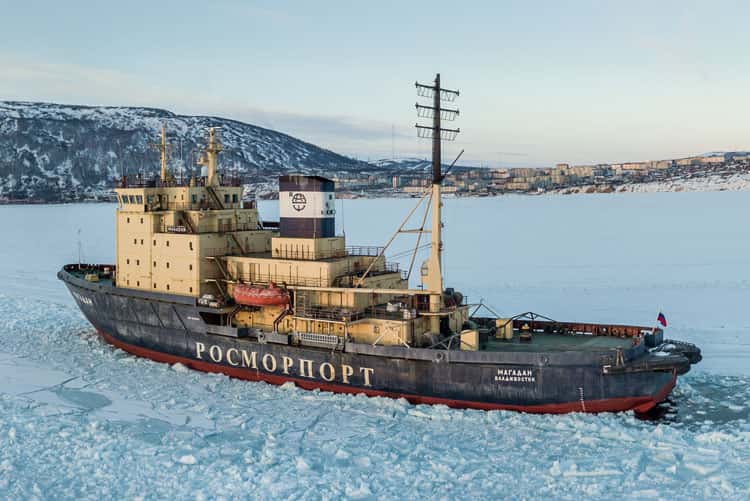 An example of an ice breaker ship

Ice breakers are used to carve lanes through ice – something other vessels cannot do. This means that they can get to places off-limits to others and create lanes navigable by other ships. As you can probably imagine, they are primarily used in areas such as the Arctic, where ice is common – you’re unlikely to find an ice breaker plying its trade in the waters off Dubai!

To operate in such challenging conditions, ice breakers need specialised features. For example, types of propellers for ships of this type are often tailored to withstand the rigours placed on them and have individually replaceable blades. Large amounts of reinforcements are also added to the hull to protect it from being damaged by the ice. 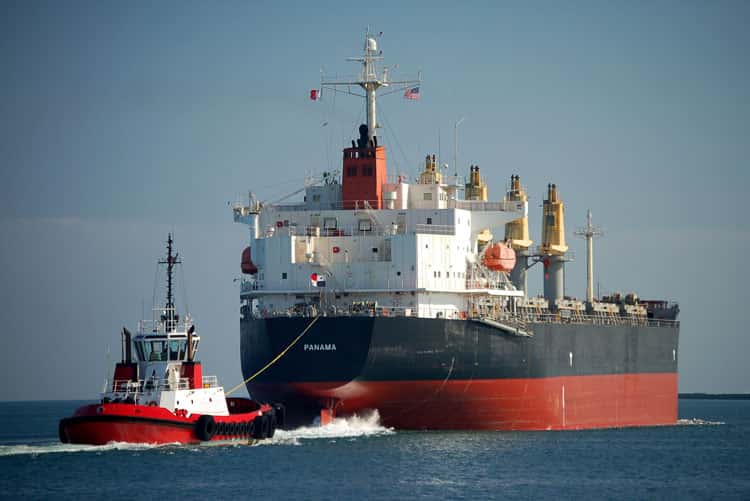 An example of a tug boat

Tugs are an integral part of the maritime world, performing all manner of jobs that ensure global shipping runs smoothly. Their primary role is the manoeuvring of vessels, allowing larger ships to navigate specific stretches of water safely. Tugs can also be used in various other ways, such as firefighting, ocean towage, and patrolling.

There are a few types of tugboats, with the most common being conventional tugboats and tractor tugs. Tugboats are found in almost every port worldwide – without them, ports would come to a grinding halt. Why not find out more about tugboats and their uses by reading through our tugboats guide? 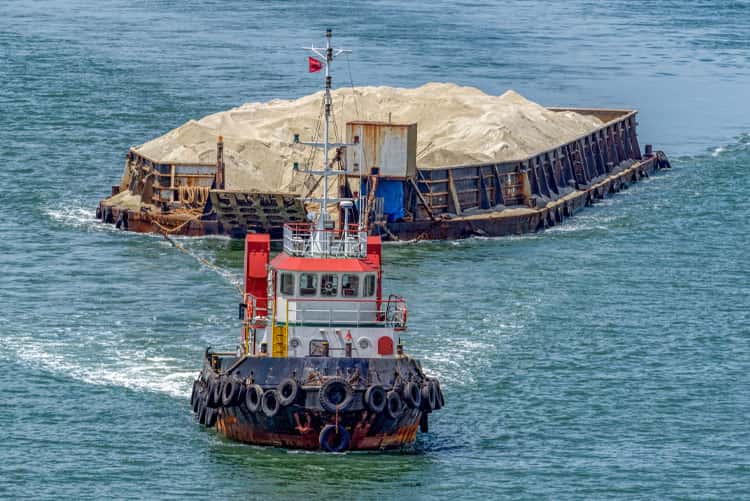 An example of a barge vessel

Barges are generally unpropelled vessels that must be moved by other ships or machinery. They are essentially large vessels onto which various types of cargo can be stowed, including vehicles, goods, and passengers. Most commonly, barges are used to haul low-value items, as barges are cheap to operate, or items that are heavy or otherwise difficult to transport.

Barges can be purchased easily, although a cheaper option is usually to hire a vessel for the job you need to complete. Barges aren’t usually taken onto the open ocean and operate in more coastal regions, although some self-propelled barges can operate safely away from the shore. 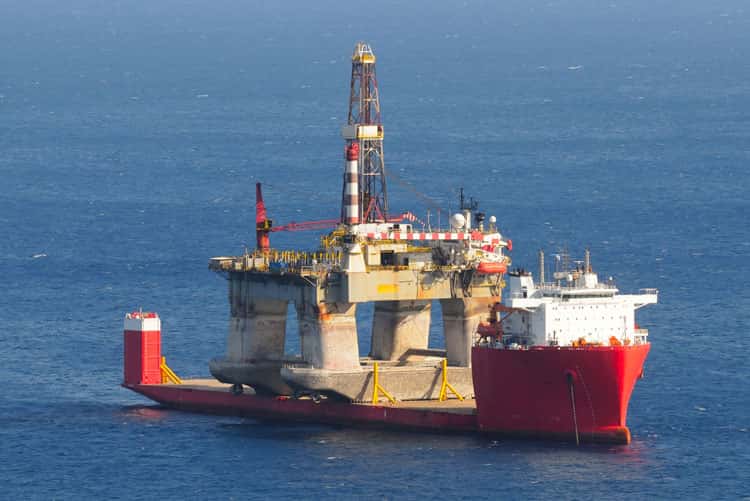 An example of a heavy lift cargo ship

Vessels of this type are designed to lift exceptionally oversized loads, which would be too heavy for a regular ship to handle. Some are semi-submersible, meaning they can essentially sink under the water before re-emerging after the load has been placed above them. In contrast, others simply use heavy-lift cranes and employ sufficient ballast.

Vessels such as these can be used for various roles, such as the transportation of oil rigs and large yachts. They are also sometimes used for transporting damaged warships, such as when the U.S. Navy used a ship of this type to recover the USS Fitzgerald in 2017.

As you can see, the world’s oceans are teeming with various types of ships, from giant cargo ships traversing thousands of miles to small yet powerful tugboats, flitting around ports assisting incoming vessels.

At Dexter, we work with various ship types, offering many services, including ship lay up management, tugboat hire, and much more. If you’re in the industry, why not look through our services in Dubai and the Middle East?

Overall, we hope you’ve enjoyed this piece on the various types of ships out there and that you’ve learned something new about the shipping world. If you have liked what you’ve read, please share it with your friends on social media.